Most of the information concerning “the brotherhoods” who were connected to my encounters came in the form of spoken English from the mysterious men who seemed to be common humans dressed in street cloths, and “the voice” who spoke from the crafts and objects, from thin air, and sometimes from inside our heads. Information about the brotherhoods also came from visual/physical interaction, and from suggested physical and intellectual implications. The information was conveyed to me and in some cases to those who were with me during several key encounters. Most of these encounters occurred when I was a child and many of the somewhat more important encounters took place during my early and late teen years. 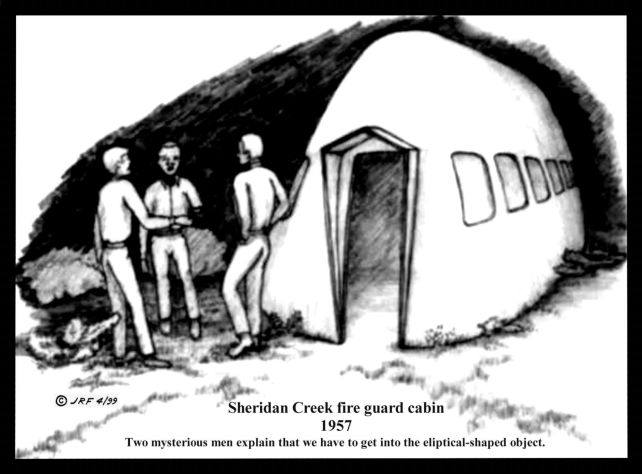 The brotherhoods were not named or defined until my teen years… particularly during one encounter that occurred in August of 1950 at the Bethany Grade School Playground in Lincoln, Nebraska and another that occurred in early June of 1957 at the Sheridan Creek Fire Guard Cabin in Western Wyoming, near the small town of Dubois. The encounter at Bethany Grade School Playground lasted for at least two hours and the Sheridan Creek Cabin encounter lasted from just after supper until just before a late breakfast the next morning.

I can confidentially say that the one main brotherhood was who I encountered throughout my life. I can confidently conjecture this because the nature of my encounters was primarily the same throughout the entire 46+ years. This included the various types of mysterious lights, objects, crafts, men, beings, and voice being the same from the time I was 2 or 3 years old until my last overt encounter that occurred in August of 1986 when I was 48 years old. Also the brotherhoods, as you will find below, worked for the Arch Angels Michael and Gabriel who, to my understanding, were two of the most active spiritual entities of written history.

I believe the timing of the different types of encounters that occurred throughout my life is important to analyze because the timing suggests a nurturing, a conditioning, an education, and protection of not only me but individuals like me during their encounters so that we will develop particular personal beliefs and qualities that will help us carry out predefined tasks in our later years. The tasks also are intricately designed and conveyed to us through, not only our personal UFO and spiritual encounters, but through direct mental ESP messages as each of us grows toward the time when we are to participate in the major part of our preassigned “task.”

The mental messages I firmly believe come in the form of thoughts and ideas in each individual’s mind, these particular thoughts and ideas masquerading as the individual’s own thoughts. And it is “the mysterious brotherhood intelligences” who instigate the ideas and thoughts so that the ideas and thoughts will mesh with the overall plan that is being orchestrated by the  intelligences to guide or control the destines of our human cultures, as well as the destiny of humankind, as humankind progresses throughout the ages.

The mysterious intelligences who I encountered told me directly, in perfect English, that they were responsible to a hierarchy. They said the hierarchy included the arch angels Michael and Gabriel who were responsible to the historical entity we have call Christ who is in charge of this corner of our universe. You can consider that the term “mysterious intelligences” included the historical spiritual brotherhoods, the primary brotherhood being those who are responsible to Michael and Gabriel and who are the ones who orchestrate personal UFO and spiritual interaction with human abductees and contactees during the encounters.

We met Michael personally at the Sheridan Creek Fire Guard Cabin in early June of 1957. He seemed to be a brilliant white light that hovered not more than 10 feet above us and he spoke from the light. We were told later by one of the men (or “the voice”) that Michael was in charge of fighting the battle to save men (and women). And we were told that Gabriel was out there somewhere in the world helping men (and women) develop their spiritual and metaphysical talents and abilities.

The main brotherhood includes the mysterious “Voice,” the men, the lizard-like beings, the alligator or crocodile beings, and their various generally unknown Unidentified Flying Objects and crafts, and possibly other entities who might or might not have been defined in written history and legend.

For a better understanding and clarification at this point, you could say those who I call “the mysterious intelligences” most probably include the inventors brotherhood, all of the other brotherhoods, the hierarchy which includes the arch angels Michael and Gabriel, and the entity who we have called Christ who is in charge of this corner of the universe. And I’m sure “God” or “the prime creator of our eternal universe” hovers above them all.

In respect to the inventors brotherhood, it is interesting to note that a friend and I met, in person, in what seemed to be normal three dimensional reality, historical and modern inventors during the June 1957 Sheridan Creek Fire Guard Cabin experience. We were told verbally that the inventors were a brotherhood who received their assignments from the hierarchy. And we were told they all took their assignments very seriously. My friend and I were then told that we also should take our assignments very seriously. However I, at that time, didn’t recall any assignments I had received. 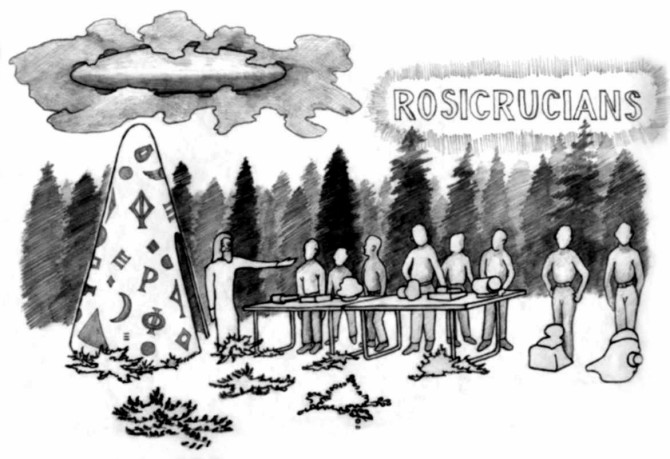 Yet, during my 1986/1987 “flood of recollections” I recalled encounters where I was given, in extreme detail, an invention I was to develop later in life. I received most of the information related to the invention during what I call future time travels, where “the familiar strangers” most often arrived in a mysterious elongated windowed craft and picked me up…and also always a relative or friend who happened to be with me. We then flew off into the future, stopping off at different times and locations where we received information about those future times and locations. We normally continued traveling on until we arrived at our pre-planned final destination where we were shown and told what we were to do in the future. This normally included verbal and experiential information that was related to our tasks or my task…all of it related to what I call a future “Et/human project.” The project is described and defined in other articles on this website and in the books I have written. It is important to note that I did eventually meet “the familiar strangers” after my 1986/1987 “flood of recollections” under more normal circumstances.

It also is important at this time to let you know that I have rejected my role in “the project” as it was conveyed to me during the future time travels, as well as during my interaction with the familiar strangers after my 1986/1987 flood of recollections. I have rejected my role in the project beyond writing a few books and writing on this website…i.e. unless the so-called Ets show up again and convince me this is all for the betterment of humankind and in the interest of who we know as God.

If you are interested in the nature of the brotherhoods beyond ancient religious documents, written descriptions of modern brotherhoods and written accounts of my encounters…as the brotherhoods function in what we have called the spiritual realm…more insight can be gleaned from the book The Keys Of Enoch. However, I do not necessarily, at this time, support all that is written in the book.

During the Sheridan Creek Fire Guard Cabin encounter, that occurred in June of 1957, we were told and shown that the brotherhood of the lizard-like beings were the ones who rode in the crafts and objects and they were the ones who piloted the crafts and objects when alone and when others (including myself) rode inside. However, it was implied by demonstration and verbiage that the lizard-like brotherhood was not normally seen. The demonstration seemed to suggest that these entities were considered, in what you could call the spiritual or the other dimensional realms, to be somewhat grand and honorable. 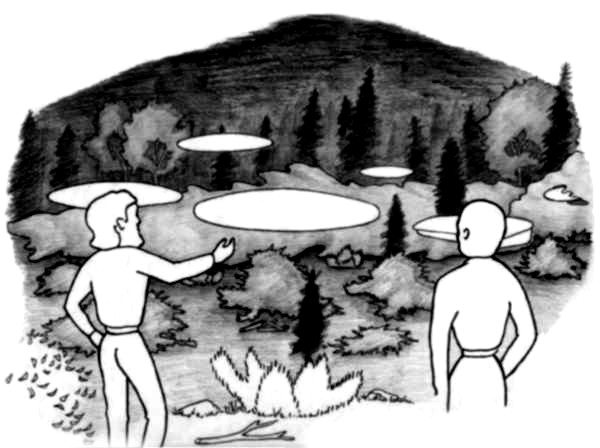 During the Sheridan Creek Fire Guard Cabin encounter we also were told that they had been active in prehistory, during the ancient Egyptian culture, during Biblical times, and more modern times. We also were told and it was demonstrated that the brotherhood or brotherhoods were connected in some way the the Masonic Order or the Masonic Lodge. It is well known that the Masonic Lodge designed and constructed famous buildings in mid and ancient history and throughout the United States. My task I was to find out during my 1986/1987 flood of recollections was in part to participate in the design and construction of buildings for the “Et/human project.”

Not yet recalling anything obviously significant that might have been related to my encounters, I did become a Mason sometime around 1980 before my 1986/1987 flood of recollections. I found later that the Masonic ceremonies were very similar and in some cases nearly identical to the ceremonial activities that took place during my encounters. This would indicate that there is a solid connection of the so-called Ets I encountered with the spiritual entities of history and those of the ancient and modern Masonic Order.