Meet below, Steve — a very unusual, honest human being who has an unusual knowledge and a talent that can bring the mysteries of UFO encounters into more understandable context with modern sciences, religions, and history. He is a mental health practitioner who also has developed new more credible personal investigation methods to interview and analyse UFO contactees. I highly recommend his work. You can it find on http://www.omahaufostudygroup.com/ .

Steve wanted to make a comment on the Chadron State Park Encounter — Part 2, but the comment turned out to be the in-depth article below. After reading it, read the book https://www.amazon.com/Healing-Shattered-Reality-Understanding-Contactee/dp/092652416X/ref=sr_1_1?dchild=1&keywords=healing+shattered+reality&qid=1623772625&sr=8-1. You will began to see the connections and understand UFO phenomenon in even greater detail. 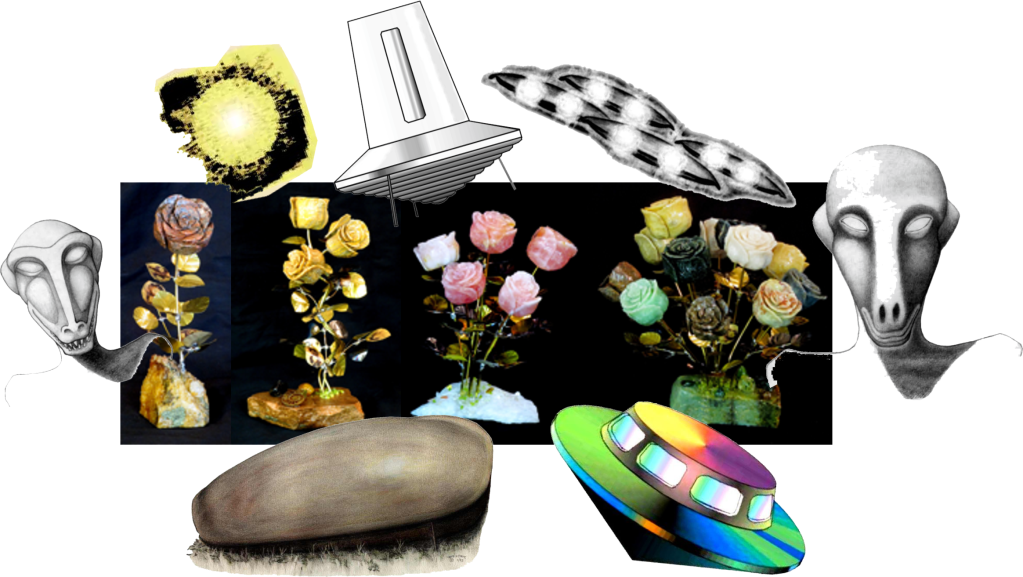 UFOs To Flowers — Flowers To UFOs

John!  Great to hear from you.

I was going to give you some brief feedback on your post, but my comments have now become longer than your actual post!  Feel free to read and consider when you have time.

“As time flows by…”  That remark in your last paragraph stirred me.  You recall my interest in the UFO phenomenon is very expansive insofar as we share interests and questions about the nature of reality, connections to minds, or a universal and necessary mind or however we construe what God is.  That does not appear to have changed even as time has flowed by.  My latest definition I’m comfortable with (although defining it is not possible with language) is:  “God is a necessary and immaterial mind (that created the universe) whose nature is ideal or absolute perfection.”

Your comment on time also reminds me of the famed UFO researcher Jacques Vallee when he said what the UFO phenomenon is trying to tell us is that we “do not know what the nature of time is“.  That is the lesson being taught. This reminded me of another thing entirely. I just listened to an interview with a totally mainstream psychiatrist, Ian McGilchrist, who brilliantly summarized 20 years of research in his book The Master and His Emissary, a book published back in 2009.

McGilchrist set out to investigate why our brains have two halfs or hemispheres, along with almost all other animals. We have a right hemisphere and a left hemisphere which is connected in a brain system called the corpus callosum. Why are our brains asymmetrical like this? Why are so many animal species the same way?  It’s very heady stuff, but I thought I would share since I see a connection to your work and experiences.

What he concludes is the right hemisphere (which just used to be associated with “creativity” and “feeling”) has not been described accurately that way.  Instead, the right hemisphere can be thought of as sort of a Master that “sees the whole but doesn’t get involved in the details” and sends the body/mind out in the world to explore the unknown.  It is just exploratory, devoted to seeking out into the chaotic world.

The left hemisphere (which commonly is described as rational, thinking, logical)…that’s not the full or correct way to think about it either.  Instead, the left hemisphere he calls the “Emissary”. The left hemisphere is more about grasping, defining, or you can think of it as predatory…out there trying to encounter specific things in the world to make sense of each of them.

Interestingly, the corpus callosum having inhibiting neurons mostly does its work by keeping our left and right hemispheres separated, inhibiting activity between them.  You can think of your arm or hand reaching forward to explore something like your flower rock art as right hemisphere activity (who knows what you are going to create?), and your arm grasping the rock and tooling it and shaping it as left hemisphere, with the corpus callosum responsible for stopping your hand in a position to then grasp.  A back and forth process of bringing a beautiful object like a rock hewn flower into existence that wasn’t there before.

It can be as simple as going to the grocery store.  You know the way there and expect to get there to get toilet paper or something because you’ve done it hundreds of times (left hemisphere).  But something unexpected happens this time.  The road is closed.  Immediately you become hyperalert, try to recall all the different roads you could take to get to the grocery store and are in a sort of fog. (right hemisphere, the unknown).  Your right hemisphere (Master) sends your left hemisphere (Emissay) out on a mission to figure it out.  Can I take a left and circle around or does Havelock street go through?

All this is to say we are built in such a way as to explore unknown territory, make sense of it (assimilate it), and then return having figured out one thing which now becomes known or explored territory, creating order out of chaos.  It can be a terrible struggle full of suffering, but the discovery and growth that happens can justify the suffering.  We know when we are right on balance when we are on the razor’s edge between order and chaos (as represented by the Yin/Yang symbol and the cross) or such as when you feel in your painting or rock carving that it is meaningful activity.

Even in the life of Christ we have an example of the “perfect” person…one who voluntarily confronts the suffering of all humanity, bears that burden of the cross, dies, and is reborn anew.  The suffering on the cross is worth it.  The Buddha did something similar by setting out how to be in a world that consists of suffering.  If you scratch the surface, every one of us is dealing with some really difficult circumstance.  Voluntarily confronting it and bearing the burden of that suffering (courageously) in the end justifies that suffering we endured.  It just works, and we tend to know it when we are doing just that, taking responsibility and engaging in meaningful, productive work that is hard.  That could be what religious traditions call the holy spirit working through us.

The thing that really connected this understand to you is McGilchrist’s more philosophical thoughts on the nature of the universe.  Modern science has “thingified” the world leading us to believe everything is made up of matter/objects, actual things.  Instead he believes the universe can be better thought of as “processes” because, as you say, “time goes by.”  Nothing is ever solid or fixed.  Even a mountain. A mountain is constantly changing if you were to do a billion year time-lapse photography video of it.

Are the beings you have experienced actual organisms/animals like us from another galaxy?  What you have learned and continue to teach me is it’s not that simple.  What you have encountered seems to me not a bunch of things, but instead a process, over a lifetime of experiences, of confronting the unknown, assimilating it, describing it, documenting it.  You have experienced patterns, processes of patterns, and everything you do in that regard is meaningful and productive.

What I find fun to remember is even though I have not had (or don’t recall) experiences like yours, I am going through the same process when I do my research and learn new things, question my assumptions, or even go to the grocery store.  Or like yesterday, father’s day.  My youngest daughter is going to be a freshman in high school and went out for golf. I had not picked up a golf club in probably 15 years.  But when I got a club out, I blasted the crap out of the ball, it went straight as an arrow, a long, long way.  I had gotten so mentally flummoxed with bad habits when I gave up the game so long ago, my body must have remembered all the right things I learned and erased all the mental “rules” that just ruined my game.  For a brief moment, I was back in the groove of just hitting the ball, not thinking about it.  I crushed about 5 balls in a row before my bad habits came back and I started duffing them again.

Best to you John.  I didn’t mean to write a whole chapter of a book here, but I recall you always appreciated me reacting to your thoughts and watching where my mind goes with them.  So here you go!